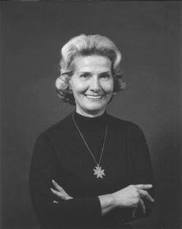 Anna Gerotheou Gallos, daughter of Fr. John Gerotheou and Presvytera Evangeline, was born in Philadelphia, PA, the eldest of four girls. One wonders if the first music she ever heard was Byzantine Chant, for her father was an excellent psalti. When she was seven years old, he insisted that Anna sing the ison for him as well as for the other psaltai. At age eight, Anna started piano lessons, and at age ten she joined the choir of the Annunciation Church in Rochester, NY (where her father was the priest) under the direction of Athan P. Theodorides. She was fifteen years old when she started to direct choirs—the first being in Somerville, MA.
While in high school, Anna pursued all music courses offered and after graduation she entered the School of Music at Boston University as a Music Education major. However, in the middle of her junior year her studies at B.U. were interrupted. Eight years later, after she was married and the mother of two sons, she resumed her studies at the Eastman School of Music where she earned her Bachelor’s degree in Theory and Voice. Twelve years later, Anna returned to Rochester during summer sessions and received her Master’s in Church Music, Composition and Conducting. Among her composition teachers were Wayne Barlow and Donald F. White of the Eastman School and Daniel Pinkham of the New England Conservatory of Music.
The Galloses spent three years (1986-1989) at the American Farm School in Thessaloniki, Greece where Fr. Gallos was Chaplain and Presvytera was Director of Musical Activities. The experience was invaluable for Anna because she was able to further her Byzantine studies with the renowned protopsáltis and teacher, the “grand gentleman” Elefthérios Georgiádes, Archon Lambadários of the Patriarchate of Constantinople, with whom she had previously studied. Although the more than fifty years of her career were highlighted with challenging guest conducting stints, two remained most memorable to her: the Patriarchal Doxology in Washington, DC on July 4th, 1990, with His All Holiness Patriarch Demetrios I presiding, and the 1992 Clergy Laity Congress Liturgy in New Orleans.
In August 1992, Anna and Fr. George Gallos celebrated their fiftieth wedding anniversary. In those fifty years and beyond, they organized and spearheaded choir federations, retreats, choir schools and workshops to help improve the spiritual and musical standards of church music and church choirs. They both played a very important part in the formation of the National Forum of Greek Orthodox Church Musicians, with the charter being presented by Anna to the Clergy-Laity Congress in 1976 in Philadelphia.
Anna served as Choir Director in the following parishes with her husband, Fr. George P. Gallos: St. George, New Britain, Connecticut; Annunciation, Rochester, New York; Annunciation, Baltimore, Maryland; St. Demetrios, Weston, Massachusetts (youth); St. Nicholas, Spartanburg, South Carolina; St. Constantine and Helen, Annapolis, Maryland; Holy Trinity, St. Augustine, Florida.  Anna was also a teacher and consultant at Hellenic College and Holy Cross Seminary in Brookline, MA.  After the death of Fr. Gallos in 1995, Anna relocated to Timonium, MD, from their parish in St. Augustine, FL, and accepted the position of Director of Music at St. Demetrios Church in Towson, MD, where she served through 2004. At the time of her death in February 2015, Anna was in the final publishing stages of her last liturgy, Opus IV, in the Plagal Fourth Mode for mixed voices, which was released in early 2017.
An Interview with Anna Gallos - The St. Nina Quarterly
One of the most prolific composers of Greek Orthodox Church music in the United States, Anna’s works include: Anna’s music continues to add inspiration to Greek Orthodox Churches around the United States. Her son, John, continues to sell, promote, and circulate her music. For additional information, please contact us.